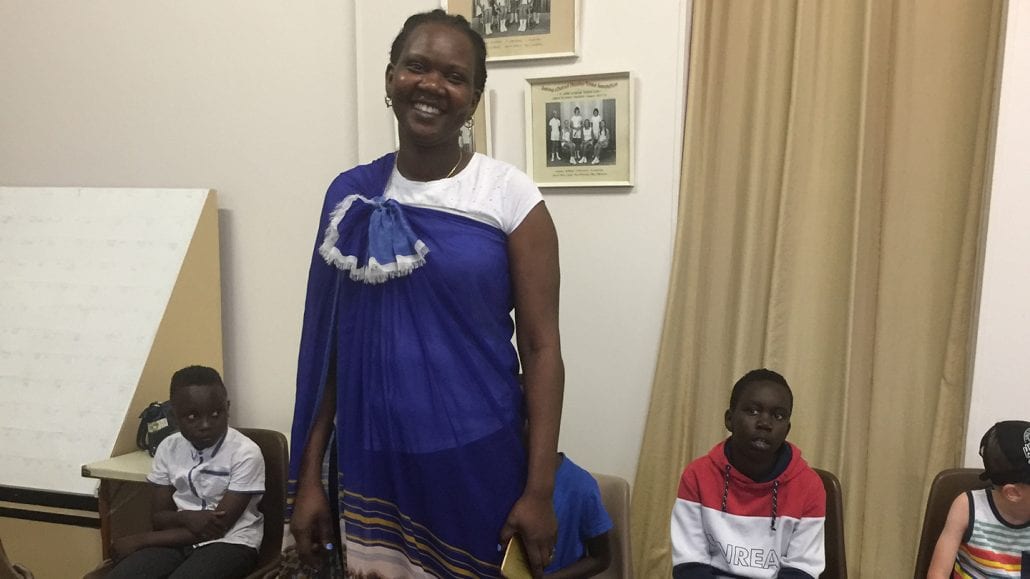 St John’s congregation in Geelong has been blessed to have a group of South Sudanese come to us, over ten years ago, to worship with us. They found us, we did not find them.

These Nuer speakers were part of a Lutheran Church in South Sudan and Ethiopia, and also had contact with Lutheran World Service in the refugee camps. Over the years the number of refugees has grown, and there is now a group of over forty worshipping at our church on a Sunday afternoon as the South Sudanese Fellowship, and gradually joining the congregation in joint worship on a Sunday morning. This year, joint worship services will be held once a month. At these joint services the major parts of the liturgy are in both languages, and if possible, hymns are chosen that can be sung in both languages.

Women play an important role in the South Sudanese church as deaconesses. They are given special training and are installed as deaconesses with a special blue gown with a white stole. They have high status in the community, and visit with families, pray and sing with them, and meet regularly with their pastor for ongoing study. In the St John’s Fellowship there are three deaconesses. Elizabeth Ruarch is the leader, an older South Sudanese woman, who has been a deaconess for many years. Two more deaconesses were trained by the spiritual leader of the Fellowship, James Ruei, who is currently employed part-time by St John’s as a lay worker, with support from the Board for Local Mission and the St John’s congregation.

Elizabeth Ruarch, the senior deaconess, came to one of our women’s fellowship meetings and spoke about her journey to Australia. She spent many years in a refugee camp at Kakuma and is sad to be separated from many of her children, as they have been settled in the USA, with some still in parts of Africa. She has one son in Australia, living in Geelong, and is able to spend time with her grandchildren here. At the meeting, Elizabeth showed us her great skill in doing beadwork panels, which she is able to sell at the markets around Geelong. As an older person she has found learning English quite difficult. Last year, Elizabeth travelled to America to spend several months with her family there. 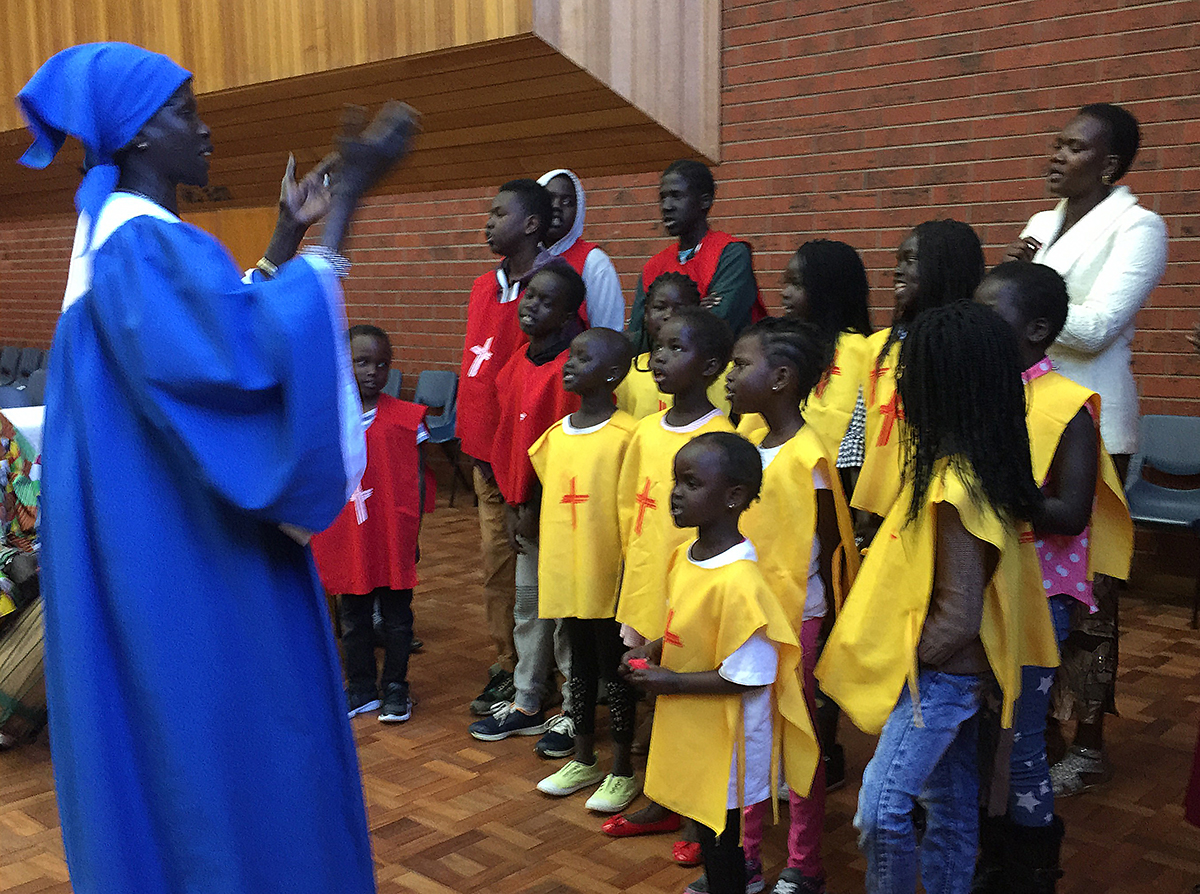 In talking to the South Sudanese women and James Ruei, we have been made aware that the women back in Africa had very strong women’s groups, and had incredible conventions, where two thousand women would gather. Some of the women in Geelong meet monthly with other women in Melbourne, but they miss these large gatherings. Four times a year, South Sudanese from all denominations gather together as Nuer Christian United, and these gatherings can have two thousand attend to praise God, and have fellowship together. Another way in which the women gather together is at “baby showers”. These are very lively and celebratory events to support a new mother with monetary gifts. Usually held in Melbourne on a Saturday night, they can go into the early hours of Sunday morning!

Culture shock is always an issue when people move from one culture to another. When asked what they liked about Australia, the women replied that the men are not allowed to hit them here, and if they do the women can complain to social workers or the police. I remember James mentioning that this was quite a shock for the men. As well, the absence of conflict and the ability of their children to get a good education is important. One of the things that they miss is the close village community, where there is always some-one to look after the children, or give support in other ways. Particularly difficult is the absence of grandparents, and many children born here may never meet their grand-parents. As in many other cultures, shame can become an overwhelming issue, and there have been a number of suicides of young people, which is a tremendous grief to the whole community. As well, there have been many times over the past years when the community have been grieving over the death of relatives in the ongoing conflict in South Sudan.

Recently, a program was set up to facilitate English language learning through conversation sessions, with three of the St John’s members meeting with five of the South Sudanese women on a Saturday afternoon. It has always been an issue with people migrating to Australia that the women, especially older women, are left behind with learning English as they are often not out in the workforce, or mixing with English speakers. Many of the younger women are working in various roles, and find this gives them greater opportunity to learn English. One of the women said that it is hard to make friends when her English is limited, and people can’t seem to understand her. Patient listening is a skill we can all cultivate with people from another culture.

St John’s established a South Sudanese Mission Support Group four years ago, as a support for our lay worker, and as a means of facilitating the goals of the mission program. We are delighted that, this year, three of the Sudanese women have joined the group, Elizabeth Ruarch, Nyamal Mun and Mary Thichior. As one of its activities, this group organizes friendship meals, and at the last meal in 2018, we had twenty adults and a large number of children gather to build relationships, tell stories and get to know each other. 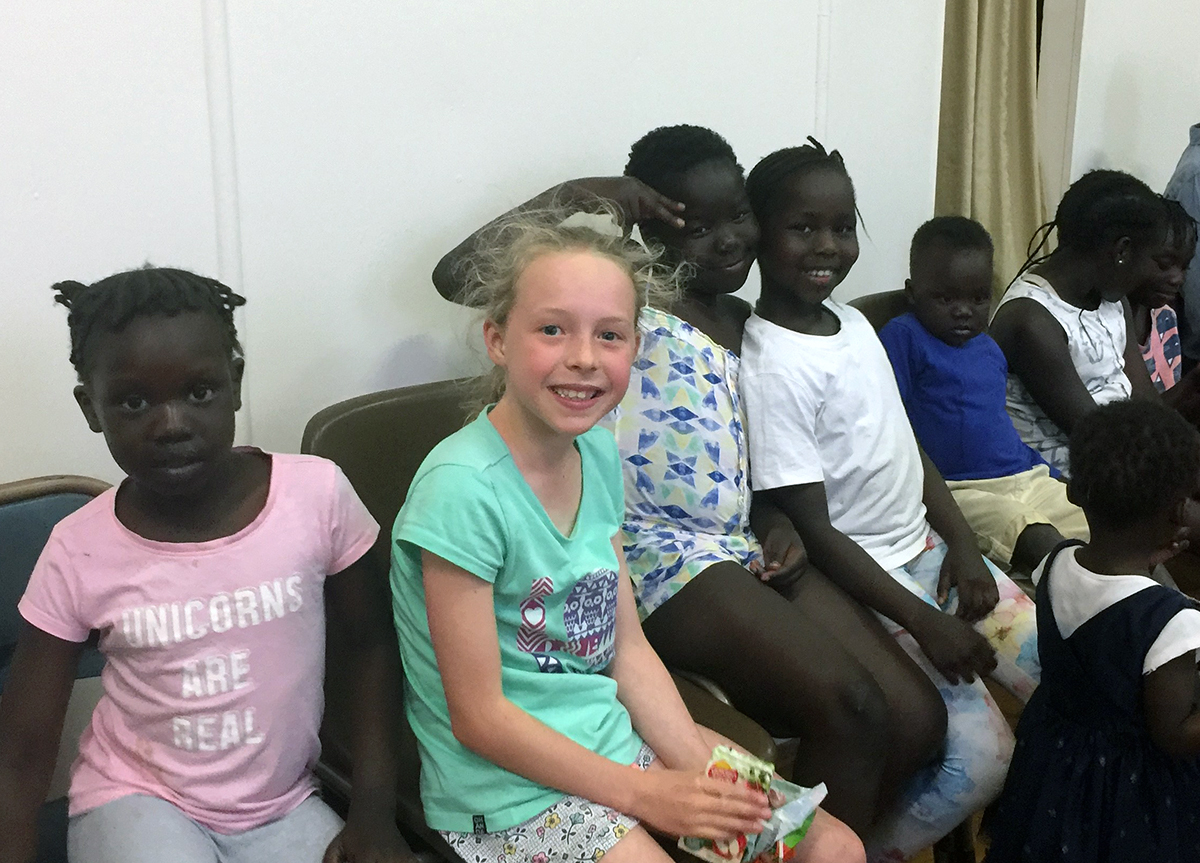 One of the initiatives of the South Sudanese Fellowship, which was set up a number of years ago, is a Saturday afternoon Nuer Language School. Around fifty children and young people of all denominations gather in Tyne Cottage at St John’s, and they learn basic Nuer language from books purchased in Ethiopia. As well they learn their culture, and have a time of Catechism or Bible stories. This initiative is to be praised as it gives the community cohesion, builds relationships between the leaders and the youth, and keeps the young people out of trouble. Representatives from the Geelong Council and the Police meet with the leaders of the Sudanese community to sort out any issues that may be arising. One initiative from these meetings is the strong involvement of Sudanese children, both boys and girls, in the local soccer competition.

Three of the South Sudanese women attended the LWV Retreat at Araluen last year and were warmly welcomed. I was pleased to be able to sit with the women and work through the material with them. It was good that, once it was explained, they could talk about the question in Nuer and then fully understand the material. It is a fascinating exercise to have two languages in use, whether in meetings or in other settings, and one needs time to sit and listen, so that an issue can be fully understood, and everyone there is able to contribute.

God has blessed our congregation with our Sudanese brothers and sisters, and we know that he will guide us as we work together to strengthen each other in faith, and to gather as one to praise him for his grace and loving kindness to us all. 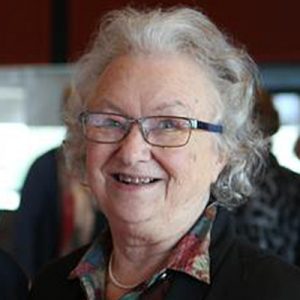 Norma Koehne is a retired teacher and former LWA President. She is enjoying living in a retirement village, and the great sense of community one has there. She is still involved with her local women's fellowship and has some roles in the congregation.