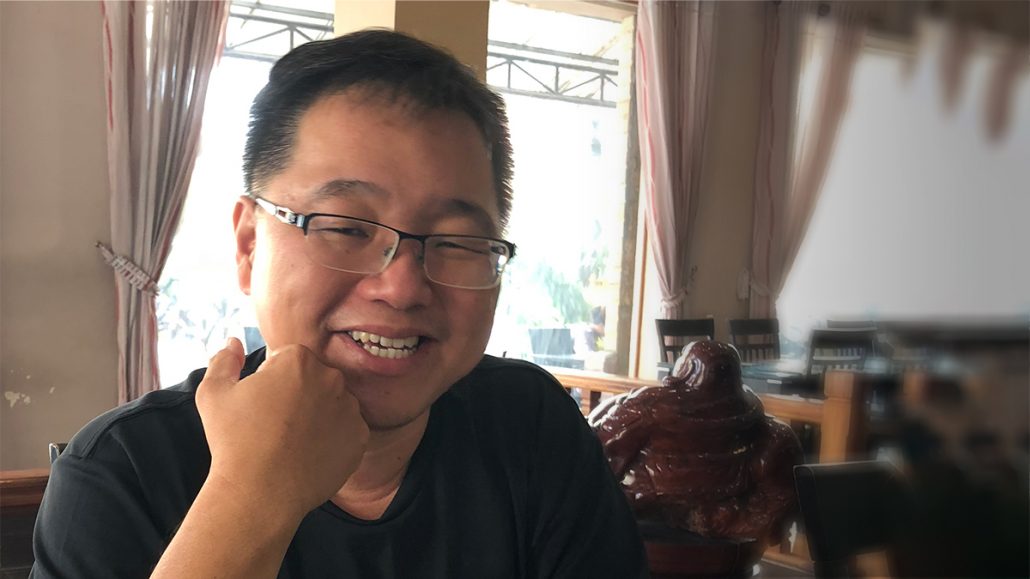 In Acts 16, the apostle Paul had a vision where the ‘men of Macedonia’ appeared before him and said, ‘Come over to Macedonia and help us.’ Concluding that God was calling him to go and preach the gospel there, Paul immediately packed up and went to serve in Macedonia.

Not many of us have such a powerful sense of purpose and calling, and perhaps even fewer respond to it so positively. But serving away from home in Cambodia, Singaporean Chak Mun is one who did respond to God’s call to ‘go over there and help’ and such has been his life ever since.

As Chak Mun darts in and out of the traffic on his scooter in Phnom Penh, a westerner might be tempted to think he is at home in Cambodia. But the reality is he is as much a foreigner there as you or me.

Chak Mun was born the first son of a Chinese-Singaporean family who followed the religion of their forebears, worshipping ancestors and living under the burden of trying to please their departed loved ones to ensure their blessing. What made Chak Mun’s family different was the fact that his parents encouraged all their children to be free thinkers. When Chak Mun joined Boys’ Brigade in primary school and learnt the Christian faith and came to believe in Jesus as his Saviour, his parents were content to support his new found faith with the condition that, at least, one of the other children continued to take care of the ancestors.

Jurong Christian Church (Lutheran) supported the Boys’ Brigade ministry and eventually Chak Mun tagged along with his friends who attended this church. As he looks back on this time, Chak Mun recognises it was the relationships he formed with adult believers and their spiritual care of him that really impacted his life at this time.

Chak Mun was baptised in 1997 and, despite the acceptance of his parents, his extended family became very angry with him as he was the eldest grandson and was supposed to lead the family in the traditions and beliefs of the past. Nevertheless, Chak Mun was captivated by the Christian faith and sought to live as a faithful child of God, serving as a Boys’ Brigade leader and supporting mission both at home and overseas.

When his mother was diagnosed with stage 4 cancer in 2005, Chak Mun became angry, questioning God and struggling with how God would allow this when he had been serving the church so faithfully. During his mother’s battle with cancer, church elders visited and shared the gospel, reminding him that our hope is not just in this life. To his delight it was during these visits that his mother heard the gospel and became a Christian before she died.

Chak Mun recognises that this was a key turning point in him truly understanding the Christian faith. He says, ‘At this time, my faith became even more real and I recognised that suffering is part of the Christian life, but our hope is bigger than our suffering. Up to this time I had believed that the Christian life was about what you ‘must’ do. I look back and see I was like a Pharisee. But when I saw that so much was out of our control and our works don’t help at all, I realised the gospel was not a new law but about communion with God through faith in Jesus.’

Chak Mun’s main responsibilities include: supporting Pastor Daniel Orn and other church leaders; co-ordinating logistics; project management; overseeing finances; and connecting people to address needs. You only have to spend a short time there to realise he is a key person in the life of the church because of the nurturing relationships he has developed with so many people. But Chak Mun has the wisdom to realise that he doesn’t have all the answers. ‘I’m a Singapore Christian,’ he says, ‘so I think like a Singapore Christian, not a Cambodian and the Cambodian church will eventually need to work out how to take hold of its future in its own culture.’

As you listen to Chak Mun describing his joys in serving, you can’t help but feel excited as well. He talks joyfully of ‘seeing young people maturing in faith and growing in Christian living.’ He describes the way he has realised ‘the more I serve, the more I learn, and the key thing is it’s not my work, it’s God’s work.’ And he now sees the struggles all Christians face as an opportunity to proclaim God’s faithfulness and pray with those who are suffering.

But Chak Mun wouldn’t want you to have the wrong idea – life in a young church in Cambodia is difficult, especially when it comes to serving those who carry the trauma of the war. With experience he is able to say, ‘I don’t have the capacity to deal with the needs of the Lutheran Church in Cambodia, but God does.’

Chak Mun will serve the LCC until 2022 when he prays he will no longer be needed by his Cambodian brothers and sisters.