When I first joined the Lutheran Church of Australia (LCA) as an adult convert, many well-meaning church members would automatically change my surname to Zanker because, as I was told, everyone knows there are no Ankers in the LCA!

In my second parish where the secretary’s surname was Zanker, she kindly started referring to herself as ‘zAnker’ to make me feel more at home. What a remarkable act of hospitality!

While it never bothered me in the slightest, this sense of the LCA being a ‘family’ church where everyone knows where everyone fits in, is both a blessing and a challenge.

Think of ways in which our connectedness can be both a blessing and a challenge in the life of the LCA – especially when it comes to welcoming new-comers.

This desire to connect everyone is completely understandable given the history of the LCA. As a church traditionally made up largely of ‘foreigners’ and viewed with suspicion as recently as the 1940s, it’s only natural that people want to know what your connection is. But as a church of the Gospel, reaching out with the good news that Jesus suffered, died and rose again for all, surely we pray God would bring new, unconnected people into our church family.

In this beautiful picture of God’s people gathered together in the heavenly sanctuary, what do you notice about the type of people around the throne of the Lamb? In what ways are they different from each other?

Despite the differences you noted in answer to the previous question, what key things do these people have in common? Or perhaps a better question is, ‘Who do they have in common?’

What do you imagine it will sound like when we join with people of every nation, tribe and language? What unites them in their song of praise despite all their human differences?

The Christian church has always been a multicultural community and that has enriched and blessed us throughout the ages. Jesus himself crossed cultural borders without concern, bringing the good news of forgiveness to both cultural insiders and outsiders.

Despite the moral code of the day, religious rules of purity and cultural difference, Jesus approaches an unclean Samaritan woman – an outsider “par excellence”! – and he offers her Living Water (Revelation 7:17). Although the disciples are clearly confused by all this talk of water and food, we are not told a lot about what they think about Jesus speaking with this foreigner. John simply records that “they marvelled that he was talking with a woman” (v 27). If you were eavesdropping on Jesus’ disciples’ whispered conversation at the time, what might you have heard?

I suspect that like other times, there may have been some disquiet amongst the disciples about Jesus wanting to include people who were different from them. And after more than 2000 years I suspect that most of us are not that different. It’s not that we don’t want people from other backgrounds, nationalities or cultures to be part of the church but, when they join us, sometimes we are confronted by what is different, rather than being constantly thankful that, like us, God has brought them the good news of forgiveness and, in Christ, we are able to forgive each other.

In my experience, it is not the big differences that have the potential to divide, but rather the small things that have become so much a part of our culture, that we simply see them as ‘the right way’ to do things. Everyone I know would give thanks to God for enriching a congregation with new members from different cultural backgrounds and the life they would bring. But the same people may not be so enthusiastic when worship doesn’t begin on time, parents allow their children more freedom than we’re used to, and the hall isn’t cleaned to our usual ‘standard’. It’s amazing how the devil can use such insignificant things to cause division and undermine the Holy Spirit’s work.

What would be the bottom line for you in terms of what you couldn’t give up for outsiders to be welcome and experience the love and forgiveness within the body of Christ? Noisy children in worship? Messy toilets? Unusual food smells that linger in the hall for days? Rostered cleaners not doing their job ‘properly’? Most of you probably think these things are trivial and not worthy of considering. But remember we’re not talking about putting up with these things for a week or two – but for the foreseeable future!

What does God say about foreigners and strangers in our midst? How are we to treat them? Does this presuppose that they should ‘act like us’ in all things?

Jesus interprets ‘welcoming the stranger’ in a radical way in Matthew 25:31–40.

How easy do you find it to remember Jesus’ words and act accordingly? Have you always fed and clothed and visited and welcomed Jesus as he calls you to?

At about this stage, if you’re anything like me, you’ll be feeling weighed down by the realisation that you have not always acted in the way the Lord calls his people to act. Have you failed to welcome strangers as you ought? Have you been less than charitable with people who do things differently than you expect? Have you focussed on the trivial things and failed to pay attention to the ‘one thing needful’ (Luke 10:42)?

Well, my dear sisters, I have good news for all of you! Where you have failed to welcome the stranger in your midst and fallen short of God’s command, Jesus has carried your sin and guilt to the cross and borne it on your behalf. He didn’t wait for you to become acceptable before he welcomed you and served you, but while you were still sinners, God’s enemies, Jesus died for you (Romans 5:6–10). You have now been justified and clothed in robes made white in the blood of the Lamb (Revelation 7:14). That’s why I can say with complete certainty, you are forgiven in the name of the Father and of the Son and of the Holy Spirit. You are no longer strangers, but precious children of our Heavenly Father for Jesus’ sake, freed to welcome other strangers with the same generosity that the Lord has shown you. 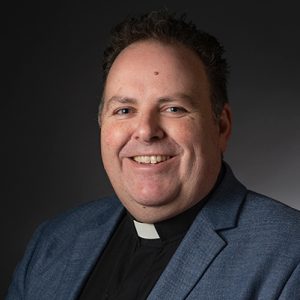 A Victorian by birth (Birregurra), Pastor Matt grew up moving, every couple of years, as his father worked his way up the ladder of the National Bank. After moving towns seven times in 14 years, Matt’s family settled in the outer north east of Melbourne where he finished his schooling. While studying Economics at Monash University, Matt met Laryssa who is now his wife and, together, God called them to faith through the ministry of the Lutheran church in Croydon. Prior to being called to ministry, Matt worked in hospitality, finance and also owned a lawn mowing franchise. Since ordination, Pastor Matt has served Holy Trinity, Mildura, the Goulburn Murray Lutheran Parish (Shepparton and Echuca) and now serves as Assistant to the Bishop – International Mission. Matt and Laryssa have four daughters, two son-in-laws, four grandchildren and a mini dachshund.