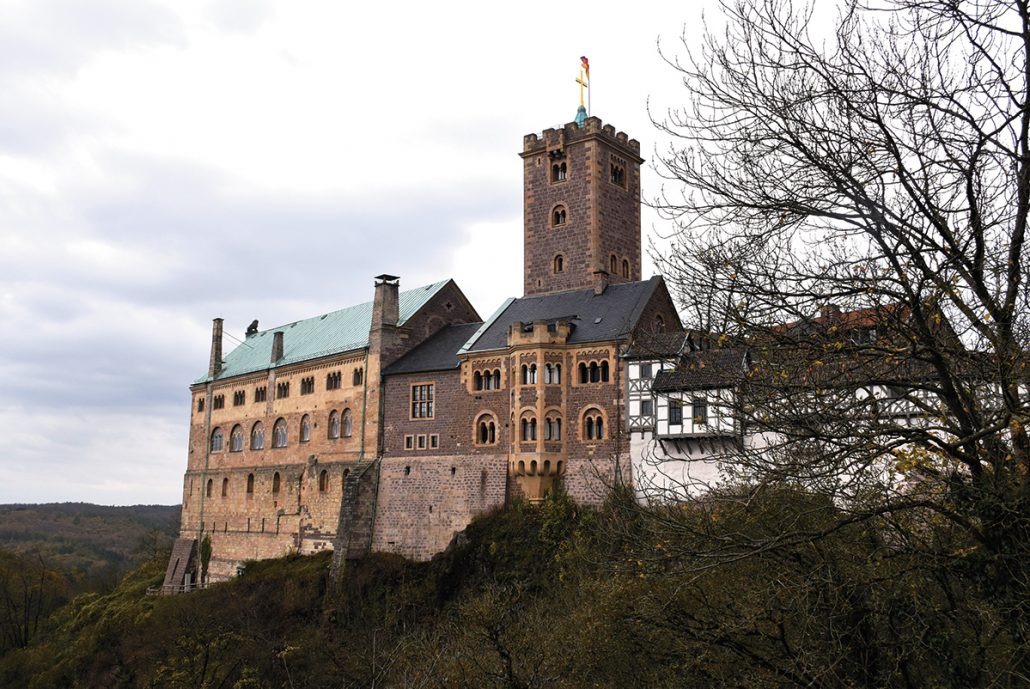 In 2017 we were very excited to be able to join a tour group going to Germany to celebrate the 500th Anniversary of the Reformation. We followed the places where Martin Luther had lived and preached and ultimately gave rise to the ‘Lutherans’.

Autumn is an amazing time of year in Europe. The green countryside transforms into a full pallet of incredible colours and then later transforms into the magical white for Christmas.

Our bus load was one of many touring at that time. It seemed all the Lutherans from all over the world were here. On every corner, in every direction were references to Luther and the Reformation. October 31 was even a public holiday in Germany. There were so many ‘Luther’ wines, beers, biscuits, cakes, books, clothes and any conceivable type of souvenir. As someone who never sought fame or recognition, he would be rolling in his grave.

Our first Luther stop was in the city of Worms. As we walked into one of Germany’s oldest cities, we were enveloped by the morning fog and the magical sound of the eight bells peeling from the Romanesque St Peter’s Catholic Cathedral which stood on the tallest part of the city, c1130-1180.

Luther only spent 10 days here, but this changed the world. He was summoned to attend the Diet in January 1521. He was declared a heretic by the political hierarchy of the Holy Roman Empire. His opponents saw his writings as war on Rome and he was supposed to disassociate himself from what he had written. He did not compromise from Scripture, ‘because to go against one’s conscience is neither right nor safe’. This cathedral is considered a starting point of the Protestant movement.

We walked a short distance to the ‘Luther memorial’ which is the largest Reformation memorial in the world. Unveiled in 1686 and by Ernst Rietschel. Very impressive, with Luther standing tall holding his Bible surrounded by reformers and friends, Frederick the Wise, Johannes Reuchlin and Philipp Melanchthon. It comprises nine statues, eight portraits and numerous plaques.

On his way home from Worms, he was ‘kidnapped’ by Frederick the Wise and kept in Wartburg castle which we will visit later.

On to Coburg. The Vesta Coburg which stands on the hill above Coburg is one of Germany’s largest castles. Here Luther was granted refuge between April and September 1530, during the Diet of Augsburg where there was debate about Luther’s heresy. The Dukes, Frederick the Wise and Johann the Constant were supporters of the Reformation.

Luther translated the Bible into German here, for all the people to be able to read. He wrote 100 letters and 16 manuscripts also. The impressive Fortress was started in 1056 and added to many times. In 1430, three fortified rings were added when it was under threat from Hussites. It has been added to many times since. The Luther Chapel was reconstructed in 1909. This amazing Fortress is so huge with so many magnificent rooms crammed full of history and artworks. The Dukes who lived there were ardent art collectors and lovers of fine living. It houses the most important Art Collections and history of Germany. We did not have nearly enough time to appreciate the numerous treasures.

We went into the cobbled stone town square where the market place was filled with many stalls of local fresh produce and handcrafts. The beautifully decorated restored and coloured buildings surround us. We see St Moriz church, the oldest in Coburg, from the 1100s, Romanesque then Gothic. Luther preached seven times during Easter of 1530. It is very light being painted in white and yellow with a huge Baroque organ from 1740 and a 12-metre altar of alabaster.

We visited the town of Torgau where Luther visited over 40 times. A beautiful town full of brightly coloured houses and cobbled streets. The church of St Mary is where we find the grave of Katherine von Bora, Luther’s wife, who died in 1552. It has whitewash and stone walls and was added to in many styles between 1300-1500s.

Luther preached there, married Katherine there and six of his children were baptised there.

Just a short distance down the road we find Hartenfels Castle. We cross over a moat and looking below we see a few brown bears, protecting the castle. The residence for the princes of Saxony is an amazing building recently restored. As is the chapel, beautiful white and bright with light brown stone, which was consecrated in 1544 by Martin Luther. It is considered the first ever newly built protestant church. Torgau established itself as the centre of political power and where protestant politics were coordinated. The league of Torgau was formed in 1526, the first attempt of a protestant military alliance.

Luther preached a sermon that specified how protestant church services were to be held. Only the Word of God. The choir master at St Mary’s, Johann Walter, worked with Luther to develop the services and also wrote hymns. He founded what is thought to be the first ever town church choir.

We move to Halle, Marketchurch (St Mary). A plain stone Gothic Baroque building with two towers of different types at either end. It has huge paintings on the walls and an organ at either end. The Cardinal Albrecht of Brandenburg had a passion for relics with over 8000, and 42 Holy Skeletons and needed a place to house them. He went overboard hawking indulgences to get them and caught Luther’s attention. He was the principle target for Luther’s protests in nailing the 95 Theses and sent a copy in letter form to the Cardinal on 31 October 1517. Luther preached here three times in 1545 and 1546.

The Protestant Marketchurch pastor was with Luther when he died. The artist Lukas Furtenagel from Halle drew Luther on his deathbed and made a plaster cast of his hands and face. On 20 February 1546 on way the Wittenburg, the procession reached Halle and the coffin was set in the vestry. The hearse was stopped continually by crushing crowds, sobbing. His death mask is held here.

Our next visit is to Eisleben, started about 1180, another picturesque town of cobbled streets and coloured houses. Luther was born on 10 November 1483 here, and died here on 18 February 1546.

We visit his birth house: a small stone house. The oldest public Luther museum, from 1600s, it traces his family history.

We go into St Andrew’s church, originally Romanesque but rebuilt Gothic after a fire, 1498. Luther gave his last sermons here and his body laid in state in the choir before going to Wittenburg.

We also visit his death house, also a museum, and see his bed chamber.

We see St Anne’s church, another beautiful Renaissance church from 1510. In 1523 it became the protestant church for miners. Luther’s father was a miner. He did not spend time here but called out to St Anne in fear during a thunderstorm near Erfurt, pledging to be a monk if saved. He kept his word and joined the Order. Next to the church is the St Augustinian Monastery founded in 1516 and housing five gabled monks’ cells in original state. Luther supervised its development. It is also the location of the first Protestant church in the area and first preschool.

St Peter Paul church is a beautiful white vaulted church where Luther was baptised 11 November 1483, the day after his birth. A recent alteration sees a large, circular hole in the centre of the church floor with a stream flowing under, used for baptisms. This symbol emphasises baptism as the centre of faith. It too has a beautiful mechanical organ and three bells.

Wartburg Castle is our next stop. It is huge and built high in the wooded mountains above Eisenach.

It was originally built Romanesque in 1067, of military and political importance, a mecca for poets and musicians, and a refuge for Luther in 1521,22. We travel up a steep cobbled path to enter. The Luther Chamber housing preserved historical tracts and Bible with Luther’s hand-written notes.

It also contains 1000 years of German arts, craftsmanship and culture. Much time needed to view!

Erfurt is another medieval town from the 1500s with many beautifully coloured timber and stone houses leaning at odd angles. Above the town square is a hill with two towering cathedrals atop.

One is St Mary’s a Romanesque cathedral built in the 800s filled with floor to ceiling stained glass windows and another marble altar of gigantic proportions. Luther was ordained here, giving his first sermon as a Catholic. Next door is St Severus built in Gothic style with stain glass from the 1400s and many paintings on each pillar. Not far away is the Augustinian monastery. Luther called it his spiritual home. He lived here as a student and we visited where he would have lived and studied and a beautiful little chapel, he worshipped in.

With great excitement next was in Wittenburg. We were at the place where it all happened!

The ‘University Chapel’, the Castle Church is where Luther nailed the 95 Theses to the doors on 31 October 1517. These doors were used as a bulletin board then. Founded in 1502, the University became the intellectual centre during the rule of Frederick the Wise. The church started as Catholic.

It was re-inaugurated on 31 October 1892, 375 years after Luthers posting. On the top of the bell tower are the very large words – ‘Ein Feste Burg Ist Unser Gott’. He preached here often and is buried here, as is Melanchthon.

Luther also preached at the City church of St Mary in the other side of town, a smaller church.

We also visit the Black Abby ‘Lutherhaus’ where Luther, his wife and six children lived, now a museum. This is where he had his first grasp of ‘gift of faith by grace alone’. It was originally built as an Augustinian Monastery in 1504.

Our tour guide unfortunately did not organise a time for us to go into the Castle Church, which was holding numerous services all day, a great disappointment to us all. The town was overflowing with markets and people dressed in period costumes – a great atmosphere.

October 31 2017 had arrived! We could choose to go back to Wittenburg and stand outside (in freezing cold) or stay in Leipsig. We chose to go to St Thomas Church of gothic style built in the 1100s. JS Bach was the music director and is buried in the Sanctuary. Thankfully we arrived early as the church was packed with over 3000 and standing room only. We stood in line for over an hour to receive Communion, which is held after the main service. Thankfully we had much choral and organ music to keep our minds soaring with the angels. Truly unforgettable!

Back at the hotel we could watch the Service from Wittenburg. So many TV shows on all week!

The next day we travelled back again to Wittenburg and were able to get into the church. We were so grateful to enter and grasp the feeling of this moment in history! A beautiful stone vaulted church with Luther symbols everywhere. Oh, to stand where he preached and by his grave!

A group photo in front of the huge doors heralded our tour’s end. Amazing 500 years in the making. 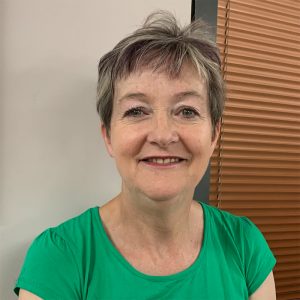 Annette is a member of Bethelehem Adelaide.