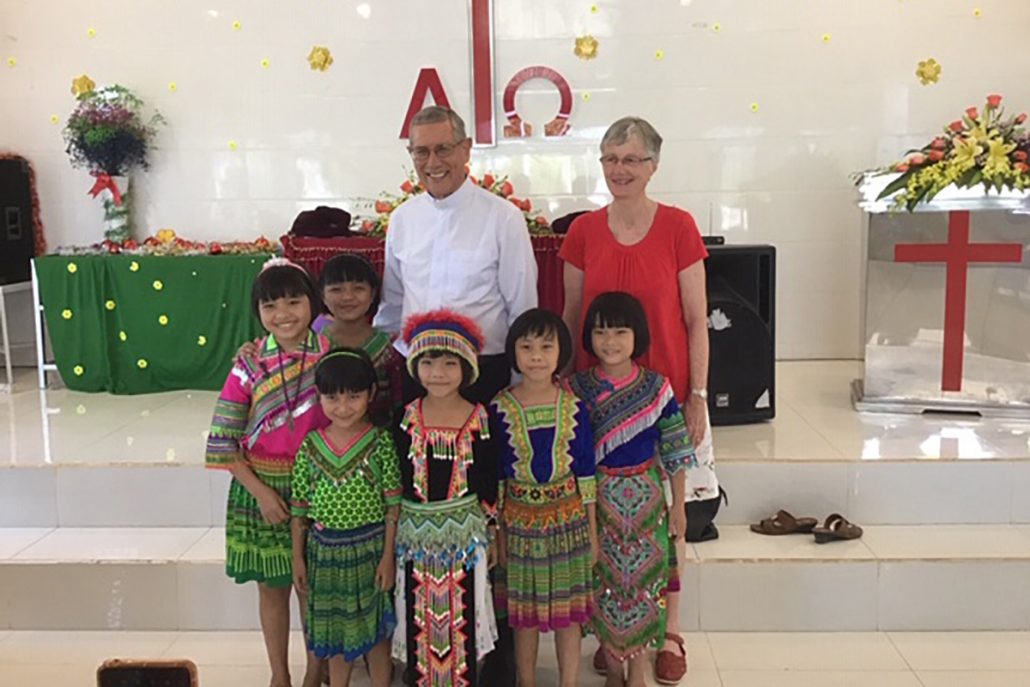 Just as I was about to tell you about ministry in Vietnam, an email arrived to say the next trip to Vietnam was cancelled due to the virus.

The airline said they regretted this, but I regret it much more. I have grown to love the people I meet in Vietnam. They are hungry to be taught the Word of God. Just this morning I received an email saying: “I hope that the coronavirus will end soon, so we can see you again in May”.

How did this all begin for me? When I was 18, I could have been called by the government to go to Vietnam to kill people. Thankfully I wasn’t. When I was 72, I was called by God to go to Vietnam to bring eternal life to people. How blessed I am! The call came through Pastor August Fricke, the leader of Asia Focus. ASIA FOCUS AUSTRALIA is a Lutheran-based, evangelical mission organisation, which supports ministries and churches in 14 countries in Asia and Africa. The work in Vietnam is with the Evangelical Lutheran Church of Vietnam, and mainly consists of teaching the Word of God to pastors and church leaders, most of whom are poor, and lead house churches, with 15 – 250 people. Each time I go, I teach two groups of about 40 each. The teaching is in HCMC and in Pleiku. Those who attend are either Lutheran or seek the Gospel centred teaching we Lutheran pastors bring to them. I always teach a book of the Bible: 1 Peter – suffering; Jonah – mission; Philippians – joy; Mark – Jesus.

The courses we teach are called VALBI – Vietnam/Australia Lutheran Bible Institute. Last year 40 people graduated from the four-year course, and 12 were ordained as pastors. Most who attend the courses are men, but some very keen women also attend. To teach we need interpreters who are mostly women. Being an interpreter is a very important calling in Vietnam. We get to know and love the interpreters since we can communicate with them. 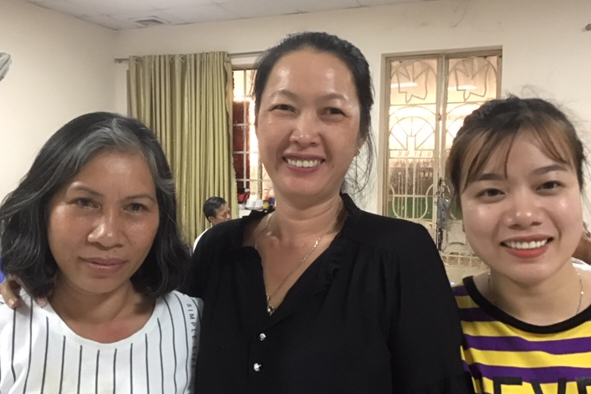 The three women Pastor David mainly speaks about. Esther on right, Mai Duong centre, and Karen on left. (They have adopted Western names, and Mai Duong is a nick name.) Main picture: Joy and David with some ethnic children at the orphanage. There are over 100 children in the orphanage.

Esther is a very special interpreter. She was Buddhist, as most people in Vietnam are. She attended University in Hanoi and was lonely and depressed. A fellow student said: “Come with me. I will take you to the place of joy.” That turned out to be a church, and she heard the Gospel for the first time, believed it, and became a Christian on that day. Her life has been one of tremendous growth as a Christian, and though she has been a stall holder, more and more she is becoming an interpreter and translator. When Joy (my wife) came to Vietnam with me last year she met Esther, who now calls us her parents. We are so happy to have such a beautiful, 32-year-old, Vietnamese daughter.

Mai Duong is another woman who calls us Mum and Dad. She was also Buddhist and lived a very troubled life. Four years ago, she was taken to a church. She heard the Gospel for the first time. After the service the pastor spoke to her and said: “Do you agree to accept Jesus as your Saviour”. Out of desperation she said: “I agree”. Her life has never been the same. Immediately she was healed of all her sicknesses. She told her family about Jesus and they too became Christian. She is a very good dressmaker and has made a perfectly fitting dress for Joy without ever meeting her. However, she lives to tell people about Jesus, and is courageous in confronting people and leading them to Jesus. We communicate each week via Google Translate. What a precious 49-year-old daughter she is!

In January I was teaching on prayer, and told people how, at a previous VALBI, a man looked very sick and was having a heart attack. We gathered around him and placed hands on him and prayed. Then I did something I had never done before. I said: “Be healed in the name of Jesus”. Immediately he said: “I feel better”. The next day he looked as though he had been born again, and he hugged and kissed me. Then he asked for prayers for his wife of 20 years who could not have a child. I prayed for his wife to have a baby. I have not seen or heard from him since. As I was telling this story in January somebody said: “The lady is now 5 months pregnant”! We all clapped and cheered.

That night Karen asked for prayer to have a baby. She said she had been healed from cancer and was 49. I and Esther and Mai Duong laid hands on her and prayed. Now she is in the hands of the loving Father who gave babies to Sarah and Rachel and Elizabeth.

Ministry in Vietnam has many dimensions: Teaching, preaching, praying, ministry in a Lutheran orphanage, ongoing correspondence, meeting people on planes and in airports.

Here is a short inspiring testimony. “My name is K’Long. I accepted Jesus in 2007, but I didn’t really trust in God. I still smoked, drank and went to church like a religion. At the end of 2019 I attended a Bible class to study the Word of God. A pastor prayed for me and I was born again completely. Praise God! Please pray for me that I stand firm in my faith. Thank you, Pastor David, for teaching the Word of God to us. Holy Spirit touched me by his Word.”

Pastor David is a retired pastor currently working in ministry in Vietnam. He is married to Joy and they live in the Adelaide Hills.

This website uses cookies to improve your experience navigating our site. By continuing to browse, you are agreeing to our use of cookies.Ok, I understand